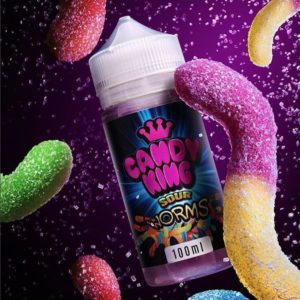 In this review, I will provide my honest opinion of each different flavor. Obviously, taste is subjective. I may like a particular flavor while you may not, but the consensus often prevails between a diversity of opinions. It is always worth experiencing something for a personal opinion.

•Sour Worm and Sour Worm on Ice – Candy King Sour Worms has the flavor of sour gummy worms on the inhale and the exhale. There is a sourness as expected but it’s not overpowering. Although it’s sour, it will give you sugar lips. It tastes a lot like blues and pinks gummy worms. The iced version has a strong menthol which gives a cooling sensation to the sweet and sour gummy worms taste. This one gets an seven and a half on a scale from one to ten.

• Swedish and Swedish on Ice – You get an assortment of Swedish Fish gum which is like a fruit punch wine gum. There is a nice consistency of these flavors throughout the vape. The iced version has a subtle touch of coolness. You get a nice menthol koolada flavor. The flavor is a lot like the original Swedish e-juice. For me, this gets a seven out of ten. Steeping this e-juice may be a great idea to enhance the flavor.

• Belts Strawberry and Belts Strawberry on Ice – When vaping this e-juice, the sour aspect is not as strong as noted on the description, You do get a sweet strawberry note. There is more like a ripe strawberry flavor instead of a candy strawberry. The iced version has a touch of menthol cooling sensation to the taste. The on Ice version actually seems to pop more in the mouth than the original Belts. It gets an eight out of ten.

• Batch and Batch on Ice – With this e-juice, you get a sour note like a lime sour patch kids. Again, the flavor is consistent throughout. The iced version is very similar to the original, offering that citrus flavor but with a cooling on the inhale and a nice, cool aftertaste. It’s a nine out of ten.

VG/PG Ratio
All of Candy King e-juices have the same vegetable glycerin (VG) and propylene glycol (PG) ratio of 70/30. There is a slight thickness, but it’s not really perceptible except with the Strawberry Watermelon, where the thickness can actually be seen. The cloud production of Candy King e-liquids are average.

Nicotine Strength
Candy King offers nicotine strength of 0 mg, 3 mg or 6 mg. When you vape the e-liquids in this line, you might feel that the on Ice version gives more of a hit than the original because of the cooling sensation that gets right in the back of the throat. Generally, the sensation is soft and not overpowering as you inhale and exhale.

Price
You have the option of purchasing a single flavor for $15.99 at https://pinkvape.com or you may choose to acquire a bundle by choosing any three flavors of your choice for only $39.99.

Conclusion
Candy King has a solid line of candy-flavored e-liquids. Each is 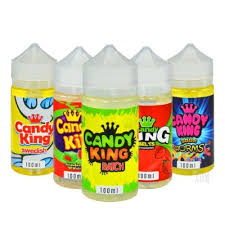 unique and different From the entire product line, my favorite is the Strawberry Watermelon. It can definitely do for an all-day vape.